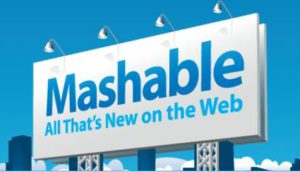 The rumor gets stronger and stronger. Will CNN buy Mashable?  The whispers in the Samsung Blogger Lounge have taken on epic proportions: Will Mashable sell? Should Mashable sell? Will Pete Cashmore sell his soul, furniture and freedom to the devil?

Time will tell if the rumor is true. But the fact that people are eying the roll-out of this story with a weary, slightly worried mindset says a lot. The big ones buy the small ones. The small ones succumb to the money. Money buys what once was fresh, daring and a little out of the mainstream.

TechCrunch and the Huffington Post were bought by AOL, Yahoo bought deli.ci.ous. Each time, a huge controversy started right away: Can a small independent social news station keep its soul, spirit and autonomy once it gets acquired by a big player? History shows us that most often the answer is “No, it cannot.”  TechCrunch is not TechCrunch any more:  regardless of the many promises and statements, clearly the focus shifted. It’s still quality, but cooked in a different pot.  Michael Arrington left his TechCrunch baby after quarrels with Arianna Huffington, AOL’s chief of media.  When a big player buys, sooner or later, different rules apply.

The fact that the big players eye the independent news blogs is significant. Most often, the blogs are quicker, better connected, more critical and they have a better way of putting information into context. Their blogger/reporters are passionate, opinionated, smart and tough as nails. They are people on a mission.

CNN wanting Mashable shows that a traditional network sees the value of a well-connected knot of bloggers. The whole traditional media versus online media is death. Really, there is just media, and it reflects perfectly how people consume their news: through multi-screens. One eye on the television, another one on the iPad, following posts and tweets.

My soul wants to scream: “Pete, don’t do it!” but my ratio tells me I would sell if I were him. Big buys small. Small gets rich. Such is life. There will be another independent Mashable somewhere. For a while.

Purpose & the Stakeholder Factor: 10 Trends from 2021 and Beyond